Magic And The Witching Hour

I have a friend named Christina who just had a beautiful baby boy. While we got all wrapped up in birth stories, breastfeeding, and the overall joy of mommy hood, but then she started describing something that slammed me so hard back into one of the first hard struggles I had with Little Man, and that was the damned witching hour.
So I dedicate this post to her.
You will survive this. :)

The witching hour. Sigh. Let me first say that the name is complete crap! It does not last an hour, in fact it has not really truly started until you are at least an hour into it. Little Man started his bit at 4 p.m. I would anxiously watch the clock starting at about 2 and try to come up with some sort of plan to ward off my impending doom. I had read multiple articles and done tons of research on this and basically what it all boiled down to was being outside of a bubble that you were once in for 9 months is total bitch. The only thing you could try to do was recreate that bubble. So...think like a womb. Since I do not exactly remember by 9 month stretch of water balloon vacation I stuck to the basics.  The bath was an obvious first choice. The bath was pretty magical. Low lights, warm water, and skin to skin contact worked very nicely. He would lay on my chest while I poured warm water over his tiny body. The bond that we have is so very powerful. Sometimes the bath did not work and I would have to seek refuge in other things. During this phase of his life is when I discovered the power of baby wearing. I had a Moby wrap (http://www.mobywrap.com/mw/Home.htm) and it was BY FAR the best gift I have ever been given. I would wrap him up in my Moby and take my screaming child to a magical place out in the yard called "The Bunny Trail". The bunny trail was a large pathway cut through some black berry patches that connected our yard to the neighboring road that goes up the mountain that lives behind us (yes, the mountain lives there as if it has the opportunity to move when its lease is up). The blackberry bushes are taller than you are and it has a very Secret Garden feel to it. Its quiet and calm, yet buzzing with life. The greenery, the trees, the mossy soft ground, and the chirp and cheep of life was enough to calm my screaming child. He would look around with his pitiful face all red and tear streaked. He would lay on my chest and just feel the movement of the walk with calming sounds of nature. I would talk to him while we walked and tell him all the things that were around us. I would point things out and brings things closer to him.  We walked the bunny trail several times a day. It was a cleanser of all things bad and one of the few things that slayed the silent demon of the witching hour. 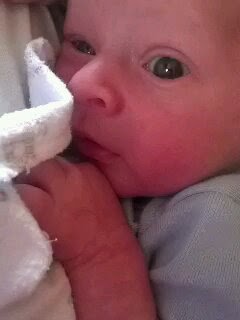 I had also read that over stimulation also would contribute to the witching hour. I would like to publicly thank Costco for this. Costco is over stimulating to anyone really, but we started to referring to whole activity as "Being Costco'd". It never failed every time we went there and  I would pay for it ten folds that evening. I can not say the exact day the witch left us. I guess because on days he was not haunted by her I just chalked up as a good day. Eventually, the good days became routine and just like it came it was gone in a flash. Now its a distant memory. I do have to thank the witch (a little bit) because she really gave me an opportunity to learn about my little man and bond with him. We have a very, very powerful bond and I will admit sometimes it can be a bit overwhelming. If it wasnt for the witch I wouldnt know how to truly read him and his needs. She inspired me to be creative and to not be scared to look for answers and try new things.
Someday, Christina, you will say the same thing.

All magical things happen in the bath. When Little Man was just a few months old he found "his legs" in the bath. He would splash and stretch them and my heart would flutter with love. You can watch that here.

These days the bath is a whole new fun thing!!

Posted by RaisingLittleMan at 12:25 PM

RaisingLittleMan
Hi! Thank you for stopping by and checking me out. I am a mother to a beautiful baby boy and I am here to show you my wonderful, scary, mostly hilarious outlook on my life as a first time mother.