My Wandering Mind VS Reality

Little Man and I went to the park the other evening. When I pulled up I was pleased to find that there was only one family at the toddler area. I wanted Little Man to have some good run around time without the threat of a bunch of bigger kids plowing over him, because, frankly, he plows himself over enough as it is. As I am sitting on the swings, swaying back and forth watching the other family, I start to notice some things. First off they were happy. It was a family of 4. Two little boys and a set of an adults. The man and woman seemed very happy and content together. They were giggling and playing with the two little boys, they played chase around the field, they even had an impromptu water fight with the fountain. The man would run up behind the woman, wrap his arms around her, lift her up and swing her around, her giggles and screams filled the air with robust laughter, you could feel and hear her love. Sigh. Here I am I sitting on a swing alone watching my 1 year old surf in the gravel. I'm not really into self pity, but it was like these guys were filming a Hallmark movie. Is this real? What made that woman different than I?
I, then became very aware that I was probably staring too hard at them and  (even worse) I think I may have been glaring. I wiped the look off my face and decided that my time would come and if it didn't well, screw it, I'll be fine.
Little Man and I finished our play at the park and just as we were leaving the Hallmark family was gathering their things. Then something happened that I didn't expect.....but should have. The woman and the two kids got into their modest (but seen better days ) minivan and the guy jumped into his nice, brand new truck, but not before kissing her and shutting her into the drivers seat of the van. Then they left in opposite directions.

Could it be that not so long ago she ....was me? That this love and fun time was the budding of a ~new~ relationship. All of a sudden, I started to not feel like the "odd" one. I was, infact, the normal one. I all of a sudden found an appreciation for her even if I had her situation all wrong, maybe the guy needed to go back to work? Or go to the store? Or go home to his real wife? How could I know?! Wrong or right, it gave me strength.  It gave me some reassurance that it's ok to be me. It's ok to be a single mom and pour all of my heart and soul into one 2 foot high, bald man. I know that's the right thing to do. It's just not always the easiest and by now I know that easy usually means I cut a corner. "No cutting corners this time, girl." I said to myself. I then loaded my dirty,  pudgey, smiling, red eyed, tired little boy up in his car seat and we stopped at the grocery store and bought doughnuts....because while we are focusing on just the two of us, we are going to eat doughnuts and laugh at ourselves. 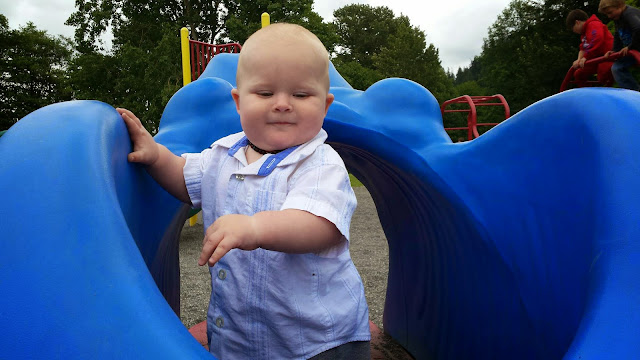 Posted by RaisingLittleMan at 12:56 PM

RaisingLittleMan
Hi! Thank you for stopping by and checking me out. I am a mother to a beautiful baby boy and I am here to show you my wonderful, scary, mostly hilarious outlook on my life as a first time mother.